When the Lights Go Out 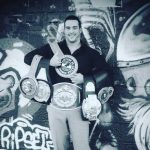 Whether we are aware of it or not, we all have a purpose in life. Fortunately, if we are not lucky enough to know what our purpose is, the universe has a way of leading us to it. I would like to share with you someone I met who has a unique story.

David “Nino” Rodriguez born and raised in El Paso is a Heavy Weight World Champion with an impressive record of 37-2-35 of which 25 were first-round knockouts. He was ranked 13th in the World by the WBC and 12th by the WBA.  His first-round knocks outs surpass Mike Tyson’s earlier record. His most recent accomplishment is penning his very first book: “When the Lights Go Out”.

At age five he was a victim of bullying; it was this that taught him what it meant to fight back. David took these experiences and channeled his energies into the ring where he would later become a World Champion. Unfortunately, David’s time on top of the world was short-lived. He was violently attacked in Arizona and suffered a severe open wound injury to the neck. David received 369 stitches and later slipped into a coma for two days due to heavy blood loss.

David worked his way back to the ring to regain his status only to be handed his first brutal defeat being knocked out in the last ten seconds of a fight he was winning. In his subsequent match, David once again left the ring with another loss. Despite the setbacks, David was victorious after his third match back. This win however came at a cost; he suffered a permanent spinal injury which required surgery.

David knew his future was uncertain and used his recovery time for self-reflection. He began to write about his life on his iPhone. This writing initially served only as a cathartic release. It was while writing that David had the “aha” moment of his life’s purpose: he turned the entries into a book, hoping to help others who had experienced their own struggles.

Today, David Rodriguez the Author is also a motivational speaker. David Speaks at alternative schools and detention facilities nationwide. In addition to this, he serves as a powerful mentor to bullied youth through sharing his own experiences.

David’s life has come full circle- from victim to victor; and the irony is not lost on him that the once-troubled youth who caused mischief in the classroom now stands at the front of the class in a suit and tie connecting with today’s youth.

David’s journey proves that we may not know what our purpose is but we can rest assured we will be led there. We’ll all face battles inside and outside the ring, we just should roll with the punches and trust we will end up exactly where we are supposed to be. You can find out more about David at DavidNinoRodriguez.com or purchase his highly inspirational book on Amazon.