Who doesn’t enjoy a good wedding?  We can’t wait to see the brides dress, the wedding party, venue, and more.  But have you ever thought of the meaning behind the customs we do at weddings? We have all heard the saying “Something old, something new, something borrowed and something blue” are to bring luck for the union.  But here are some meanings you may or may not know about.  Back in the day weddings were not out of love but actually out of economic reasons, as a way for the groom’s family to take 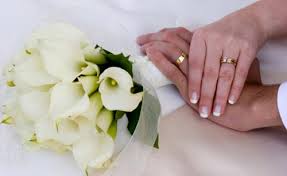 care of the bride’s family once married.  It was until much later that we now marry out of love, rather than for money.

The wedding dress was a way for the Bride to be to show off her best in her closet in order to show the Groom she came from wealth.  The Bride would her very best clothing including furs, silk and velvet.  The practice of the father giving away the Bride dates back to when fathers used their daughters as a form of currency to pay off a land debt or to even buy their way into a higher social status. A father walking his daughter down the aisle today is a sign of his approval to the groom. The wedding veil was a way to not allow the Groom seeing his bride before as a superstition of it being bad luck, but it actually goes back to the time of arranged marriages when you did not know your intended spouse.

When we look into the wedding party the Best Man was chosen to help the Groom if the Bride decided to run at the last moment and it was customary for him to even stand at the honeymoon bedroom door if she decided to not consummate the marriage.  The Maid of Honor and Bridesmaid dresses were originally designed to be very similar to the Brides as a way to ward off evil spirits.  It is also believed that if an old sweetheart of the Bride tried to break up the ceremony and take the Bride that he would be confused by so many similar dresses and not know which one was the Bride.

The rings symbolize the binding of the Bride and Groom- the ring having no beginning or ending as a reminder of everlasting love. The ring is placed on the left hand ring finger as it is believed to be the vein connected to the heart.  After the vows and rings are exchanged, the wedding kiss is customary to “seal the deal”.  Finally, as a symbol of what the future may hold, the wedding cake originally represented fertility for the Bride and Groom.  In fact, in older times many women would even stand around the cake in hopes of catching crumbs as they were believed to bring luck.  In other superstitions surrounding cake, it was once even believed that saving the top of the wedding cake ensured the Groom’s fidelity.

Traditionally, a celebratory reception and meal follow most ceremonies. When receptions first began, it was customary for loved ones to go to the Newlywed’s home and make noise until they came outside in their wedding attire. Once outside, family and friends would proceed to feed the newly-married couple. The bouquet and garter toss has evolved from the old custom of the guests taking pieces of the brides clothing due to it was believed she was lucky for getting married.  It is believed today whoever catches the bouquet and garter is the next to marry and that is why they are thrown to the single people.

Tying tin cans and decorating the car is also symbolic to the men that they have lost their chances with the bride as she is whisked away. Traditionally throwing rice is symbolically blessing the couple with prosperity, fortune and fertility.   It has become unpopular because of the misbelief that the rice expands in birds and kills them.  Rice may be more hazardous to the guests as it may cause some nasty falls- whether you chose to believe, or not to believe in wedding superstitions or traditions, remember one thing: you can create your own ideas and customs- after all it is YOUR day!