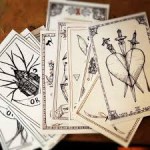 There is a higher wisdom or universal truth we can all tap into and there are many methods of gathering this information.  One way is through the Tarot cards.  Our subconscious mind thinks or communicates through symbolism.  The Tarot cards can give messages through these symbols giving guidance and direction into our lives or certain situations. Similar to when sleeping our dreams can talk to us through symbols and we decode the meaning of symbols in order to receive the deeper meaning of our dreams.

Tarot cards were first mentioned around 1440 in a letter from the Duke of Milan, there was a request for several decks of “triumph” cards to be used at a special event is believed to be how tarot cards originated.  At first Tarot decks were created as a game.   The decks were used to play a game called triumph that was similar to bridge. In triumph, 21 of the 22 special picture cards were permanent trump cards. The game spread quickly to all parts of Europe. People began referring to as Tarocchi, which is an Italian version of the French word tarot, around 1530.

In 1781, in France and England, followers of the occult discovered Tarot cards. They saw the symbolic pictures of the cards as having more meaning than the simple trump cards they were used for at the time. They used the cards as a divination tool, and occult writers wrote about “the Tarot.” After this, the Tarot became a part of occult philosophy.

It is also those who believe that Tarot cards originated in Egypt. It is believed to be the sole surviving “book” from the great fire that burned the libraries of ancient Egypt. In this theory, the cards are considered to be the hieroglyphical keys to life.

The major arcana cards did hold secret symbolic meanings for Sufis, who influenced the Kabala this is why correlations are sometimes drawn between the Kabala and Tarot cards.

Nowadays, most modern Tarot cards are used for divination or as a symbol-system for personal growth and development.  Tarot cards are often used as vehicles for artistic expression as well, and numerous artists (including Salvador Dali) have used the symbolism of the Tarot as a means of creative expression.

Tarot cards have not specifically been known as “cards of the devil.”  That title was given to all playing cards by early churchmen – and had nothing to do with fortune-telling.  These protectors of the faith were condemning playing cards because they were used for gambling.  Some sinners went so far as to play cards when (gasp!) they should have been at church services.

Today’s regular playing cards are considered a bastardized version of Tarot cards.  Both deck types have 4 suits, Hearts or Cups, Clubs or Wands, Spades or Swords, and Diamonds or Pentacles.  There is Ace through 10 of each suite along with the Court Cards. Predicting the future from a regular deck of playing cards is called cartomacy.